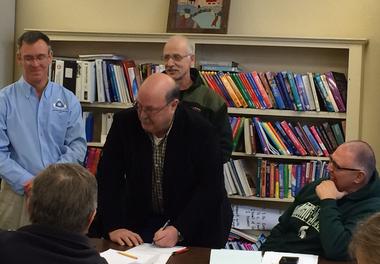 It’s a done deal – the agreement between the National Park Service and Solon Township and the City of Cedar Springs to extend the North Country Trail through the area – has been signed.

Specifics about exactly where the trail will be are still being worked out, but an agreement was reached at a meeting that took place at Hillside School in Cedar Springs on Jan. 21.

A portion of the White Pine Trail will be used as part of the connector between the existing segment of the NCT that heads north out of the Rouge River State Game Area. According to Slavin, the paperwork to allow the use is already in the works.

In the future, a portion of the North Country Trail may run parallel to the White Pine Trail, since there are some areas where the existing trail likely will not be able to meet national park specifications.

“There are some questions about the width with potential landowner issues along the way, and there is a portion that allows motorized vehicles,” said Loudenslager. “That section wouldn’t be able to be certified.” The White Pine Trail south of Cedar Springs to Russel Street allows for motorized traffic during the winter.

But for now the defined optimal route includes using the White Pine Trail as part of the proposed new segment of the North Country Trail.

The National Park Service is interested in trail building in the area, in particular, because currently the area’s portion of the trail that runs 4,600 miles across the United States is now largely “road walk.”

“There are two short segments of certified trail at the south end of the (Rouge River State) game area, but a safe and more enjoyable off-road route is needed,” said the park’s report.

Potential points of interest along the proposed route are Long Lake County Park, Howard Christensen Nature Center, Duke Creek, Cedar Creek, and the city of Cedar Springs, which is pursuing the process of being named an official trail town, and Solon Township Hall.

Solon Township has completed the master plan process for a public park on the 19.25-acre parcel on which its newly constructed township hall is located at 15185 Algoma Ave.

Park concept plans call for walking trails, playgrounds and restrooms. Stakes for a perimeter walking trail are going in this week, according to Hal Babcock, who serves on both the township Planning Commission and Parks Committee.

The new portion of the NCT will be about seven miles in length and require a host of volunteers for actual trail building. “We will be looking for some people soon, so whenever you are ready to go, you will have people ready to help,” said Beth Keloneva, president of West Michigan chapter of NCTA.

Other discussion points were potential accommodations for through-hikers. “We have land along Cedar Creek. I understand hikers like rustic spots to stay every 10 miles or so,” said Robert Truesdale. “We have some very large trees and I was thinking small overnight cabins or even tree-houses.”

The area has two existing campgrounds which both allow primitive camping as well, said Rose Powell.

With papers signed, the next step is working out the route – that process will involve working with property owners along the proposed route.